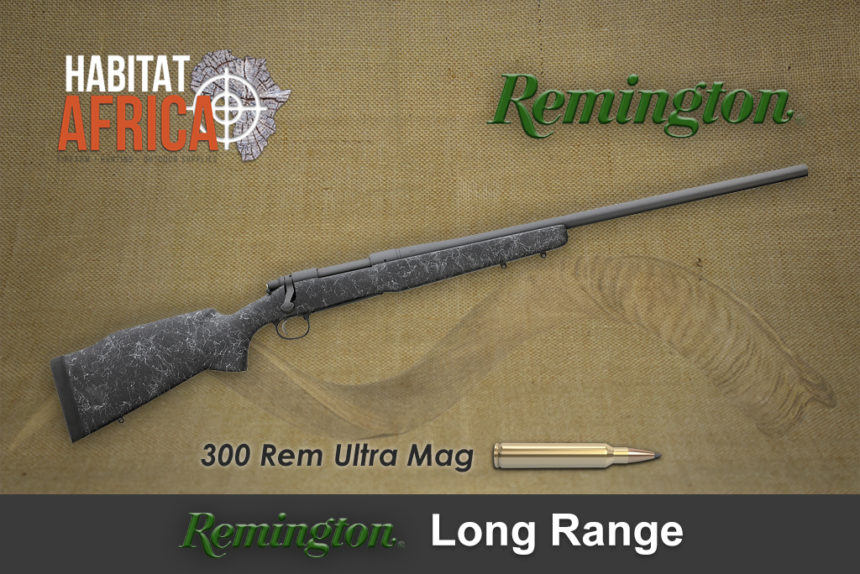 The Remington 300 Rem Ultra Magnum Long Range rifle was designed like the Sendero SF II, for consistent accuracy. For its new Long Range rifle, Remington took its coveted 700 action and paired it with a medium contour, heavy barrel. Placed it in a top-notch Bell and Carlson M40 target-style stock and installed its excellent X-Mark Pro trigger. It is a solid platform for long range shots, on the range or out hunting on the plains of South Africa. From extended-range big-game hunting to printing one-ragged-hole groups from the bench, no rifle delivers like the Model 700™ Long Range.

The heavy contour 26 inch free-floating barrel of the Remington 300 Rem Ultra Magnum Long Range will effectively eliminate vibration. This will ensure solid accuracy and performance round after round.
Built on the famous Model 700™ cylindrical action, Remington Long Range rifles are of the most accurate models for over-the-counter sale. The Remington 300 Rem Ultra Magnum Long Range is a tack-driver created by using input from serious shooters. The Bell & Carlson M40 tactical stock is reinforced with aramid fibers. It features a contoured beaver tail fore-end, raised cheek piece and ambidextrous palm swell. Twin front swivel studs can accommodate a sling and a bi-pod. The full-length aluminum bedding blocks create an accuracy-enhancing platforms for the barreled actions.

The Remington Model 700 Long Range chambered in the 300 Remington Ultra Magnum Caliber is more of a specialist medium to long range rifle. The .30 projectiles has proven itself from long range gong shoots to a great caliber for longer distance hunting. The range of bullets that seem to be the most popular is in the 175 to 220 grain range. The flatter trajectories with a muzzle velocity around the 2800 to 3200 ft/s mark, makes this a useful rifle for hunting larger bodied antelope like Kudu, Eland and Blue Wildebeest.
The ability of the 300 Winchester Magnum Caliber to achieve flatter trajectories and deliver knock down power on larger bodied animals, makes it a great choice for competition shooters and hunter alike. 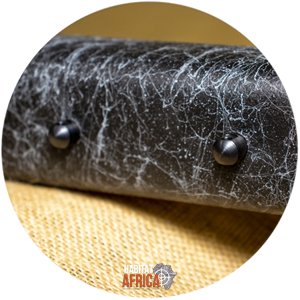 The Remington Model 700 Long Range synthetic stock has an asymmetrical grip pattern and shape that has been specifically designed to give a solid grip in all conditions, a grip that never slips. The For-end is wide and equipped with two tactical style swivel studs to accommodate a sling and the mounting of a bi-pod. It stabilizes very well on bags and other supports. The raised comb is as high as Remington could make it without interfering with bolt travel.The Grip has an ambidextrous palm swell to accommodate both left and right handed shooters.

The Bell & Carlson M40 Stock on the Remington Model 700 Long Range is finished with a wide rubber recoil pad. It reduces the impact of the recoil on the shooter which is a very useful feature, especially on the heavy calibers. The new robust pad allows you to fully concentrate on the accuracy of your shots. 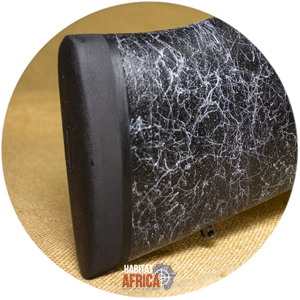 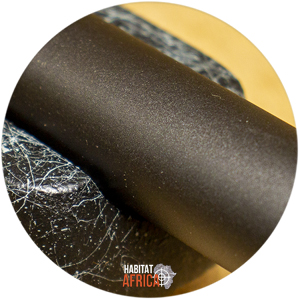 The 26-inch barrel on the Remington Model 700 Long Range absorbs heat much better than lighter, traditional hunting-barrels. The 26 inch length of the barrel will also optimize the use of all the powder in the cartridge case. Twist rates are chosen for optimal bullet performance in each Caliber.

The heavy contour barrel of the Remington Model 700 Long Range has a concave target style crown. A precisely cut crown is very important for consistency, shot after shot. The crown has a diameter of 20.5 mm 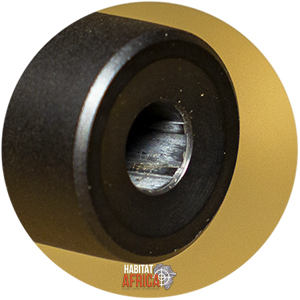 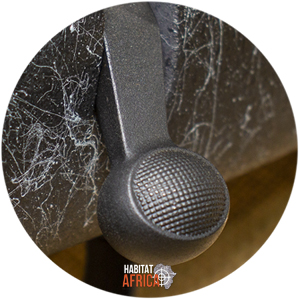 Built on the famous Model 700™ cylindrical action, the Remington Model 700 Long Range comes with a dual locking lug bolt. At the face of the bolt is one plunger-style ejector. The bolt handle has a distinct Remington knob that bears grooves to ensure a firm grip. Remington also select an action length according to the caliber size.

Robustness and quality go hand in hand with the Remington Model 700 Long Range . The metallic bolt shroud covers and shields the rear of the bolt body and the firing pin. Located between the bolt handle and the bolt shroud is also a two position safety. 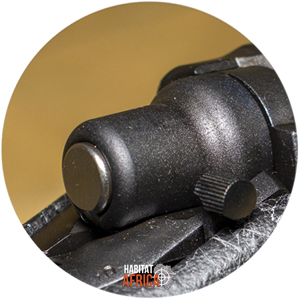 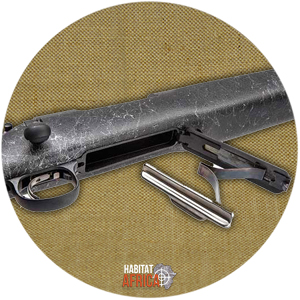 The Remington Model 700 Long Range comes standard with a metal trigger guard and hinged magazine floor plate. The magazine is not detachable.

In addition to the well-apportioned stock, the Bell & Carlson stock also has an aluminum bedding block that provides a very stable foundation for the model 700 action. The bedding block runs from underneath the chamber to the back tang and is surrounded by fiberglass. It puts a solid piece of aluminum between the action and the trigger guard. This makes it very difficult for the action to move from recoil. 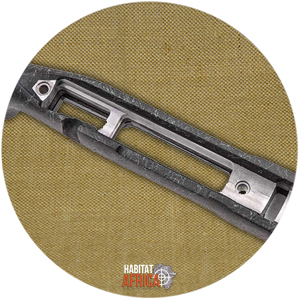 In 1913 Charles Newton introduced the world’s first high capacity .30 caliber cartridge, based on the 11.2mm Mauser cartridge necked down to .30 caliber. Newton’s cartridge was initially named the .30 Adolph Express after New York rifle builder Fred Adolph but later renamed as the .30 Newton. Case capacity of the .30 Newton was in every way similar to the modern 7mm, .308 Norma and .338 Winchester magnum cartridges however the Newton cartridge did not feature a belted case head. Unfortunately, Charles Newton was plagued with troubles in business. His cartridges never truly saw the light of day and with the introduction of the .300 H&H in 1925, the .30 Newton faded into history.

By the late 1980’s a more informed shooting public was now well aware that a powerful cartridge did not need a belted case. Belted cases may have been handy for wildcat case forming operations and indeed, the belted magnums had proven to be winners at 1000 yards. However the belt no longer served the purpose that it was designed for with the heavily tapered H&H cartridge designs and it’s more recent role as a marketing ploy, the belted case head had run its course.

The 1980’s saw Aubrey White and Noburo Uno of North American Shooting Systems (NASS), based in British Columbia Canada, begin the development of magnum capacity cartridges based on the .404 Jeffery’s Nitro Express. By 1995, basing his designs on the formed brass purchased from Noburo Uno, Don Allen of Dakota Arms had designed a full line of non belted 2.5” case length magnum proprietary cartridges for his Dakota rifles. At the same time, cartridge and rifle designer John Lazzeroni was developing a line of prototype cartridges which later became a line of both long 2.788” magnums and short 2.030” magnums.

In 1999 Remington released the .300 Remington Ultra magnum based loosely on the 404 Jeffery case design. The creation of the .300 Remington Ultra Magnum circumvented the proprietary status from the existing .404 based cartridges while spawning major competition with Winchester. A main feature of both the Remington and Winchester magnums was a rebated rim, allowing these cartridges to work with existing magnum bolt faces. Remington's initial factory loading for the .300 RUM (discontinued) featured the 180gr Nosler Partition at an advertised 3300fps from a 26” barrel. These figures for the 180 grain bullet weight were later revised to 3250fps.

The .300 RUM quickly gained popularity with hunters throughout the western world. A powerful cartridge, producing impressively fast kills on light through to large medium game at close to exceedingly long ranges, this cartridge was for many, an introduction to the idea of long range hunting. Nevertheless, the .300 RUM was not without its idiosyncrasies. Excessive barrel wear, high operating costs, excessive recoil and other contributing factors put the .300 RUM into the same class as high performance race engines. For many hunters, these negative factors have become a major detraction. What was once a love affair with a potent .30 caliber magnum becomes a divorce within 600 rounds. Regardless of this, the .300 RUM is still enjoyed for its strengths by a wide range of hunters with differing needs and will most likely continue to retain a great deal of popularity for decades to come. Of the small bores, the .300 RUM is a true powerhouse.