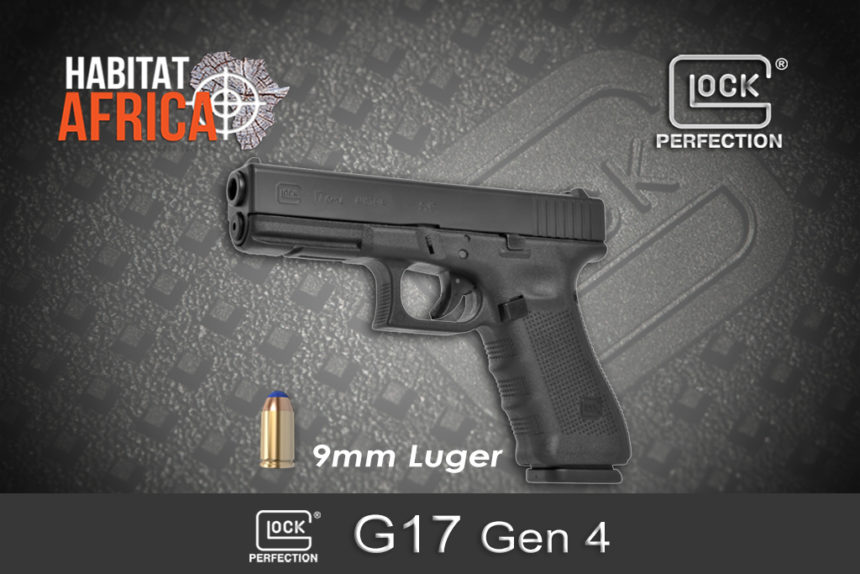 The Glock 17 Gen4 Pistol in 9x19mm, introduces a revolutionary design change to the world’s most popular pistol. The Glock 17’s Modular Back Strap design lets you instantly customize its grip to adapt to an individual shooter’s hand size. The surface of the frame employs the new scientifically designed, real-world-tested, Gen4 rough textured technology. Also available in MOS configuration.

The back strap modifications doesn’t change the grip angle of the GLOCK “Safe Action” Pistol. This ensures that the shooter does not shoot high or low when modifying the back strap or when shooting with a different GLOCK Pistol.

Additionally, the Glock 17 Gen4 has a new Rough Textured Frame (Gen4 RTF) surface designed to enhance grip traction and is present on the frame as well as the interchangeable back straps.

During development every GLOCK pistol is test fired with overcharged ammunition to establish its safety prior to delivery. A laser target test device was developed to precision test fire GLOCK pistols. This is to coordinate the hit pattern with the line of sight. Every GLOCK customer can rely on receiving a weapon that has been tested in the factory. It will  operate reliably “out of the box” without compromises or expensive additions, guaranteed!

Engineered to the same standards, the Glock 17 can withstand the same tortures as any of the other GLOCK pistols

As the first of the three GLOCK “Safe Action” safety features, the trigger safety prevents inadvertent firing by lateral forces on the trigger. Releasing the trigger will automatically reactivate the safety.

In the line of duty it may happen that a loaded pistol is dropped on the floor. Contrary to conventional pistols, the GLOCK drop safety prevents unintentional firing of a shot through hard impact. When the trigger is pulled, the trigger bar is guided in a precision safety ramp. The trigger bar is deflected from this ramp only in the moment the shot is triggered.

Unique GLOCK hi-tech surface refinement for barrel and slide. Apart from optimum corrosion protection and anti-reflective finish, a degree of hardness of 64 HRC - close to that of a diamond - is achieved.

The user has always been able to read important parameters off his GLOCK pistol at a glance. The extractor also serve as a loaded chamber indicator on all GLOCK pistols – and this entirely without additional components. Visual and palpable extractor edge.

Whether strong masculine hands or delicate female hands, the GLOCK pistol always feels as if it is made to measure.

An important factor in the development of the GLOCK pistol was its suitability for left and right-handed users alike. The special design of the operating elements, allows the index finger and thumb of left-handed persons to assume the leading role for operation. The configuration of the operating elements for left and right-handed users also reduces the possibility of inadvertent firing.

To be equipped for the various tactical requirements of the present and especially the future, GLOCK offers the user the possibility of modular-mounting a wide range of weapon accessories on his pistol.