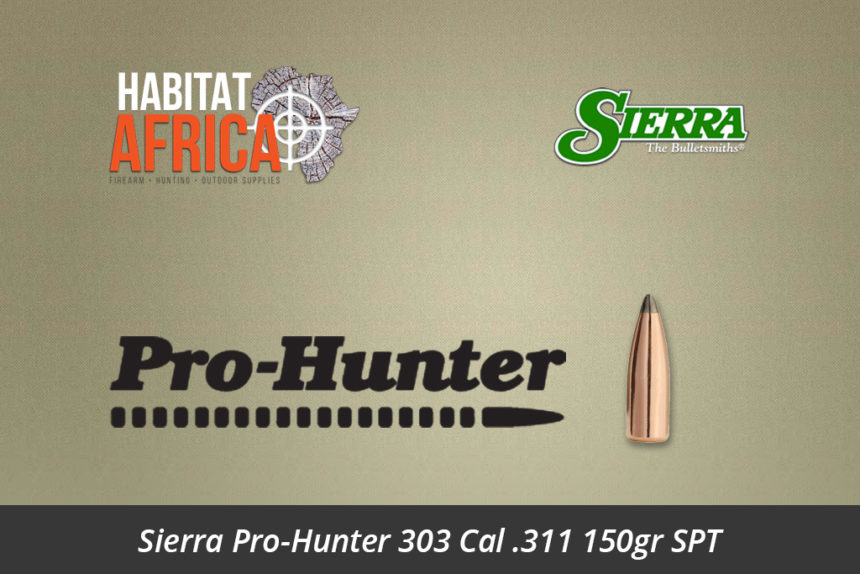 The Sierra Pro-Hunter 303 Cal 311 150gr SPT Bullet adds some much needed versatility to these often overlooked but very capable cartridges for hunting. Positive feed characteristics are required for all semi-automatic rifles using the 7.62x39mm cartridge, and Sierra’s profiled ogive point shape provides flawless functioning. The Sierra Pro-Hunter bullet has Sierra’s unique double taper heavy jacket and Spitzer Boat Tail profile. They have excellent accuracy, together with deep penetration and excellent expansion on medium and large game. The Spitzer Boat Tail shape provides a flat trajectory and high energy delivered downrange. These bullets are suitable for all of the larger .311 inch diameter service cartridges, such as the 303 British, 7.7mm Arisaka and 7.65mm Mauser.

These bullets utilize the nominal 30 caliber dimensions common to the martial arms of several foreign entities. Most of these have found their way to the United States as either war trophies or were imported as military surplus in recent years. These include the British Lee-Enfields, the late-war Japanese Arisakas, the Russian Moisin-Nagants, SKS and AK-47s and their various clones from former Soviet bloc countries. The cartridges associated with these weapons are the 303 British, the 7.7mm Arisaka, the 7.62x54R and, of course, the ubiquitous 7.62x39mm. Most of these guns use a .311″ diameter projectile but it is prudent to slug the bore if any doubt exists. Given the wartime production conditions and occasionally questionable pedigrees of some of these rifles, this procedure is a worthwhile investment. Many of these rifles are capable of delivering decent accuracy and are powerful enough to serve for use on big game.